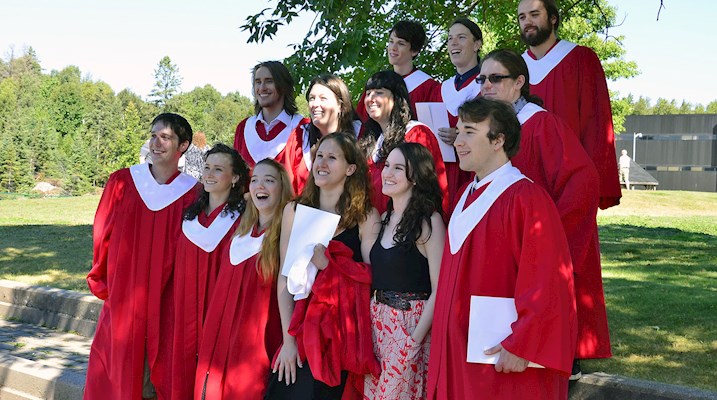 (NORTH BAY, ONT.) -- Canadore College is hosting its Convocation Ceremonies for the Schools of Business and Management; Community Justice and Police Studies; Language, Access and Preparatory Studies; Media, Design and Dramatic Arts; and Sport and Recreation on June 6.

Guest speaker Michael Cerenzie, founder and chairman of The Stratagem Group, will be speaking to approximately 550 graduates.

Cerenzie is a seasoned multi-award winning film producer, financier and serial entrepreneur who has succeeded across a wide range of creative endeavours. Born and raised in northern Ontario, Cerenzie has built a global career living and working in over twenty countries over the past thirty years.

Over his career, he has built a diverse network of both creative and business relationships, keen industry acumen, and a heightened awareness of developing trends and new opportunities to film and television development, packaging, productions, financing, treaty and non-treaty co-productions and distribution.

Cerenzie has developed, produced and financed more than a dozen films both independently and in partnership with almost every major studio in Hollywood. He has collaborated with some of the most talented filmmakers in the business including Jim Sheridan, Robert Altman and Sidney Lumet. He has also worked with an extensive list of Academy Award-winning and nominated actors that include Philip Seymour Hoffman, James Franco, Matt Dillon, Albert Finney, Michael Shannon, Marisa Tomei, Amy Ryan, James Caan, Ethan Hawke, Bob Hoskins, Stellan Skarsgard, Natascha McElhone and Gerard Depardieu.

His films have premiered or competed at the Cannes, Venice, Deauville, Sundance and Toronto International Film Festivals, and have been awarded top honors from AFI, Boston, Chicago, Los Angeles and New York Film Critics Associations and the Independent Spirit Awards among many others.

As a financier, Cerenzie has excelled specifically in cross-border development strategies and foreign investments have been responsible for raising in excess of $900 million focusing primarily on media, tech, and entertainment-related companies, and on real estate and development.

Cerenzie returned home to Canada in 2016 to fulfill a legacy building mission and soon founded The Stratagem Group. Though The Stratagem Group, Michael guides a diverse portfolio of creative companies that are designed to enable transformative change in society, and to ensure Canadian talent and institutions are equipped to compete in the booming global film market.

Cerenzie is committed to advancing Stratagem’s mandate of working collaboratively with its investment and industry partners to ensure that Canada’s creative talent and content changes lives – not just through telling meaningful stories on screen, but through building businesses, jobs and economies that support the dreams and professional aspirations of current and future generations of creative Canadians.

Students from the First Nations Technical Institute (FNTI), located on the Bay of Quinte in southeastern Ontario, will also be receiving Canadore College credentials.

Canadore College is very proud of its graduates for their accomplishments and for achieving their education goals. Each year, approximately 1,000 students graduate from the College, joining a network of 46,000 alumni working across the globe.

The ceremonies are being held at the College Drive Campus (100 College Drive, North Bay, Ont.) on Thursday, June 6 at 10 a.m.

The remaining Convocation Ceremonies will take place on:

Canadore’s convocation ceremonies are also being live streamed and relayed on TVCOGECO North Bay on channel 12 and in HD on channel 700; web viewers can tune in at http://www.canadoretv.com.

Canadore College trains people through applied learning, leadership and innovation. It provides access to over 75 full-time quality programs and has outstanding faculty and provides success services to students from nearly 400 Canadian communities and 15 international countries. The College and its students add nearly $244 million to Nipissing Parry Sound Service Area economy. Approximately 1,000 students graduate from Canadore each year, and they join 46,000 alumni working across the globe. Canadore receives less than 50 per cent of its traditional funding from the provincial Ministry of Training, Colleges and Universities and relies on its own innovation and entrepreneurial endeavors and generous donors for the balance.