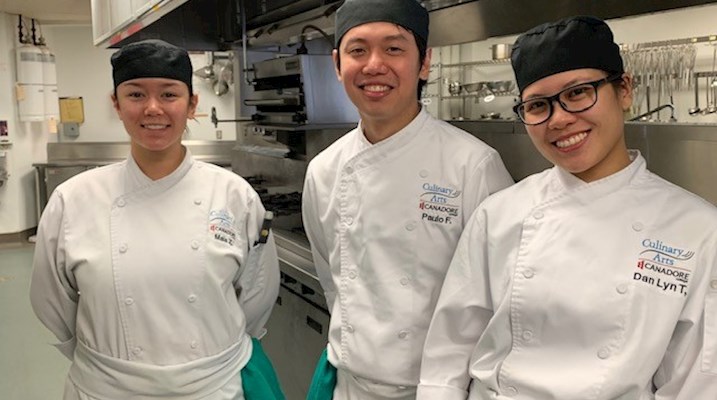 Maia Zohr, Paulo Flores, and Dan Lyn Tiu are number one when it comes to creating appetizing dishes using mushrooms and lamb as the main ingredients. The team finished first in the 2020 Student Chef Challenge on February 27, 2020, at Durham College.  There were five other colleges participating, Durham, Humber, Centennial, and two teams from Fleming. Each team consisted of three students.

"It took a second to process," said culinary management student Maia Zohr. "They announced the third place and then the second place and I was thinking: we've either won this or we didn't place at all. And they called our name. It was awesome."

First, the students butchered a whole lamb and were graded on the cuts they made. Then they went on to make three dishes.

"One would be using the dry heat method, so that would be a roast," said student Paulo Flores. "The next one, a 50-50 blend of ground lamb and mushrooms.  We did a ravioli with that one. And the last one, we had to do a family-style dish that anyone could make, an easy and affordable one. So we made a Filipino dish, a cul de letra, basically a stew."

Flores and Dan Lyn Tiu are international students from the Philippines, and this was their first competition. Zohr, who is from Golden Lake in the Peterborough area, has participated in high school competitions.

"If you don't season a dish it's not going to taste right," she said. "I think that's definitely what put us over the edge.  We were very particular about testing everything before it went on the plate."

"Competitions are great for students. They get great experiential learning from them," says Chef Fintan Flynn. "The students were totally out of their element in a different kitchen than what they're used to and ingredients that they don't use every day."

The students agree their education at Canadore helped to prepare them well for the competition, and their future careers in the culinary industry.

They will graduate this year.

"There's a good mix of one-on-one, but also they want us to be independent," said Zohr. "If we have questions they answer, but they make us think about it first."

"We enter quite a few competitions throughout the year," said Chef Flynn. "This year, we have been successful. And it's all down to their hard work, and their effort."